MAINTENANCE OF GRAB 1 IN ISKENDERUN 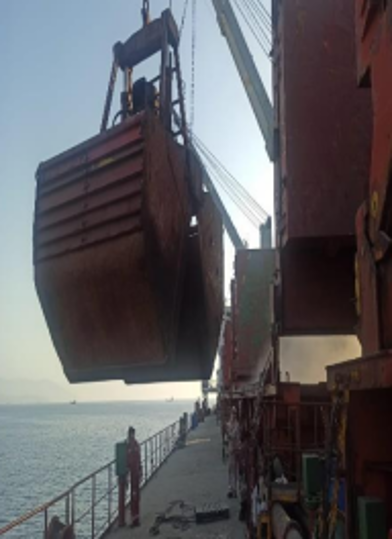 Technicians from Alatas Turkey assisted with vessel maintenance. They tested grabs for oil leaks and cylinder oil leaks, replaced the Grab 1 C-cylinder seal kit, and removed the control block hoses. The control block was also blasted and cleaned. The block’s three o-rings were replaced as well. All of this was completed before the technicians tested the grab.

The participation of Alatas technicians was for grab maintenance. Following a conference with the Chief Engineer, it was determined to inspect the grabs and fix any damage.

The vessel berthed, and Alatas Turkey technicians were on board. Our technicians were tasked to keep the grab running smoothly. After the meeting with the Chief Engineer, oil leaks in Grab 2 were investigated, and it was determined to replace the Grab 1 Cylinder seal kit. Alatas technicians examined the Grab 1 cylinder oil leak and cleaned the cylinder corrosions.

The hexagon bolt on the piston rod was prepared to be removed. They discovered that the rod bolt, which had an original size of 130 mm, had melted owing to rust. They attempted to loosen the nut with the vessel’s unique equipment. However, due to corrosion, it could not be removed.

They attempted to disassemble using a small heater. However, it could not be disassembled because its source was metal.

Alatas technicians advised that hot processing was requested. Alatas personnel said that because it is a bonded zone, permission for hot processing is required.

Alatas Turkey technicians replaced the three o-rings on the block using spares provided by the vessel. They put in the block and attached the hoses to it.

They tested the grab once everything was finished. As a result of the test, there are oil leaks at the control block surface’s deformation points.

Maintenance of Grab 1 IN ISKENDERUN gallery

WIRE ROPE CHANGE OUT IN YALOVA