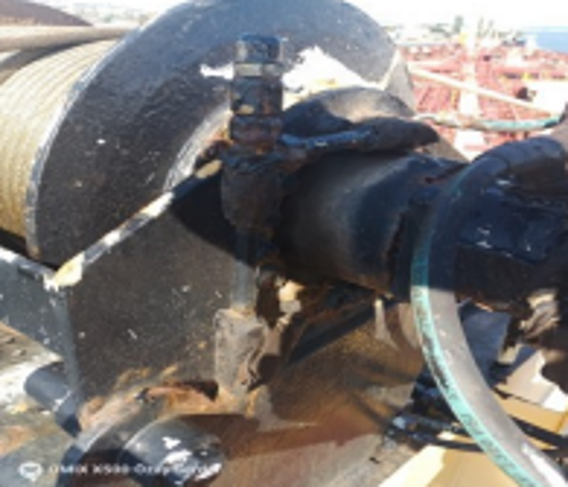 The technicians from Alatas TR attended to the vessel for hose Crane inspection, troubleshooting, and supervision for a load test. Firstly, the technicians began inspecting the hose Crane, and after observing the problems, they started the job.

The customer contacted Alatas TR, and Alatas technicians traveled to Bulgaria, attended to the vessel, did the inspections, and then fixed the problems they found. After that, they supervised the load test.

Firstly they had a meeting after attending the vessel. They completed the necessary inspections and all the troubleshooting, and Alatas TR technicians did the load test.

Right after the meeting, Alatas technicians began the job.

The last maintenance dates are unknown. The crane was started, and the technicians carried out its operational tests.

Alatas technicians reported that taking care of the detected problems is necessary.

After the inspection, Alatas TR technicians assembled the water bag for load testing. They checked the final calibration certificate of the testing company dynamometer. The test started when the crane was 10 tons. Hoisting did not make vira. The technicians tried to adjust the pressure adjustment valve on the hoisting hydro motor located on the motor ventilation. But because it was in poor condition, no precise adjustments could be made. Then the technicians changed the crane angle and performed the test again. Alatas technicians observed that it did not complete the hoisting vira movement in 5 tons. They tested it by adjusting the pressure hoisting vira was seen to be done.

Due to the low oil pressure, it has made prolonged vira movement. Alatas technicians reported that hoisting hydro motor and motor ventilation maintenance should be carried out.