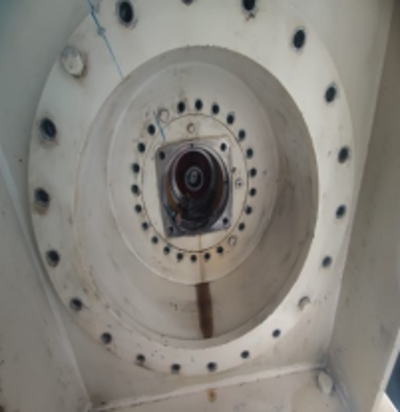 The client contacted Alatas Turkey for the gearbox change out. Alatas technicians boarded the vessel for the task mentioned above. They conducted a meeting to discuss the best course of action and then began to work on the necessary solutions.

After boarding the vessel, Alatas technicians removed the gearbox bolts. They replaced the old gearbox with the new one and transferred it to the crane. Additionally, they made hydro motor hose connections and conducted all the necessary checks.

Firstly, Alatas technicians prepared the equipment for change out of the gearbox before boarding the vessel.

They conducted a short meeting on the vessel and then began the work.

Parts were manufactured by the vessel crew so that the gearbox could be disassembled.

Once the surface was sanded and cleaned, our technicians put the new gearbox in the drum. Loctite was poured before the gearbox bolts torqued.

Alatas technicians replaced the flange and then tightened flange bolts.

After all the connections were completed, the vessel’s crew tested all functions of the crane, and no problems were encountered.

Maintenance And Repair Of The Cranes In Kocaeli, Darıca