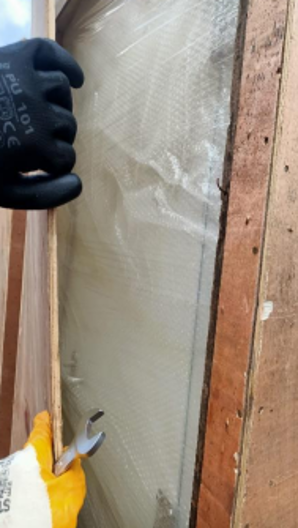 The client contacted Alatas Turkey for the crane cabin exchange. Alatas technicians boarded the vessel for the task mentioned above. After boarding the vessel and completing the job, Alatas Technicians tested the crane and found satisfactory results.

Once Alatas Turkey technicians attended the vessel, a meeting was held with onboard personnel.

The technicians completed Cable branding on Crane 1, 2, 3, and 4. Next, they inspected the new cabins on Crane 3 and 4. They then disconnected the cable connections and completed cable removal operations. The technicians severed the cable connections. They moved the consoles to the safe area and dismantled air conditioning connections. Unfortunately, they could not continue the cable removal process because the bolts on the floor were rotting. Lastly, they cut the bolts with a metal cutting machine.

The next day, Alatas Technicians completed cable disassembly jobs on Crane 1, 2, 3, and 4. Alatas technicians removed the air conditioners of Crane 3 and 4. Since the cabin lifting points were rotten, the technicians decided to cut the cabin of Crane 4.

After 4 p.m., they began the hot work. They cut off the railings around the cab and the front of the cab. Cabin cutting works have been completed.

The cabin was cut to lighten its weight and dismantled with a crane’s help.

Our technicians started the cabin cutting operations of the Crane 2.

They also completed the connection of electrical cables of Crane 4 and cabin cutting operations of Crane 2. After they made the new cabin assembly, they tightened the cabinet bolts by applying Loctite. Then they started the Electrical connections.

Alatas technicians completed the cabin assembly of the Crane 2. They also carried out installation of control consoles, horn mounting, and cabin insulation.

Our technicians cut the railings of the Crane 3, and completed the cabin cutting.

The following day on the Crane 3, Alatas technicians tightened the cabinet bolts by applying Loctite. Then they mounted an air conditioner and ground metal sheet on the Crane 2-3.

Alatas Technicians found no further issues after testing all cranes.